With all of the Ho-Oh tests that took place in Japan over the weekend, we knew that Ho-Oh would be coming soon. Although we have no official confirmation that Ho-Oh will be coming in the next week, coding in the network traffic confirms this!

Chrales, a great and credible dataminer, has discovered a downloaded news blurb that confirms Ho-Oh will be released into the Raid system soon. The alert reads "The Legendary Pokémon Ho-Oh has been spotted in Pokémon GO! Gather your friends and find a Legendary Raid Battle near you!" The 2D sprites for the normal and Shiny variants are now also being downloaded. This means that Ho-Oh is completely ready to launch, most likely once the Legendary Beasts disappear sometime on Thursday.

The text of the news alert does seem to indicate that Ho-Oh will be released through regular Raids, not EX Raids. Our thoughts on this development will be included in tomorrow morning's article about the future of EX Raids. Stay tuned for that! Thanks for reading, Trainers!


UPDATE (6:25 P.M.): Niantic has officially confirmed that Ho-Oh is now available! Go out and get one, Trainers! 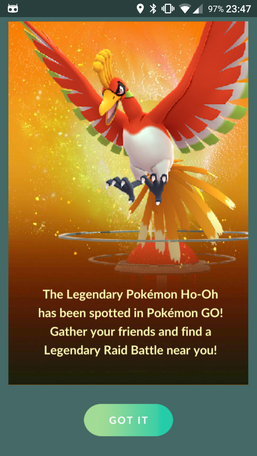